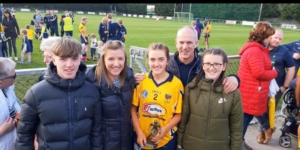 1. When did you make your senior debut?
Camogie- 2018 Championship semi final v Ballygalget
Football- 2016 League
2. Favourite position? Wing half back
3. Favourite pitch? Croke Park
4. Childhood hero? Fionnuala Carr
5. What’s your most favourite game you’ve been involved in?
Camogie: All Ireland Final 2019: build up to the game and the atmosphere on the day was unreal
Football: Championship Semi Final last year (2019) against Loughinisland
6. And a game to forget?
Camogie:All Ireland semi final this year (2020)
Football: League play off v Loughinisland 2019
7. Biggest achievement in Football/Camogie?
Football: winning Junior Championship 2019 after not having a team the previous two years
Camogie: Back to Back county and Ulster Champships and the All Ireland win 2019!!
8. You can transfer in one player from across the country, who? Would have to say Shannon Graham from Slaughtneil.
9. And transfer one out? Don’t think this would be needed
10. Who is the best trainer in the squad? Sara-Louise Graffin. Sets the standard every time
11. Who is the worst trainer in the squad? Wouldn’t say the worst trainer but definitely the joker of the squad would be Cara Boden. You never know what she’s going to say next or how she will get distracted 🙈
12. Favourite manager you’ve played under?
Camogie: current management team of Damian, Alistair, Graffin and Ross
Football: John A Gribben- the man who got everyone on board and my dad of course who between them got the girls all back for the Senior team.
13. Who is the managers pet? Jenna Boden definitely had it but would be Clare McGilligan now
14. Club Volunteer of note? Would have to say the whole of the Camogie committee. Always willing to do whatever is needed, when needed
15. Best thing about Clonduff? Definitely the supporters and the connection throughout the whole club
16. How would you like to be remembered in the club? Someone who always gave their full effort into everything I did
17. If you could give one piece of advice to the youth, what would it be?
Winning just doesn’t happen over night. It takes a lot of time and dedication, but if you have that, your half way there!!