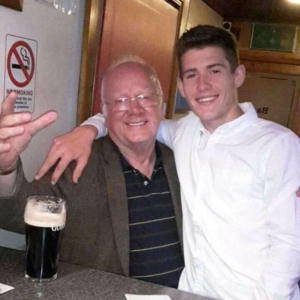 Finty is ‘God’ in Charlie’s eyes

Q1. What positions have you held in the club?
Chairman, secretary, PRO, county board rep, underage manager, trainer of 1980 team and loyal supporter.

Q2. When did you make your senior debut?
1956 – against a club, not far away – I was left half forward – just turned 17. The man I was marking, looked at me, sneered and said, “I’ll break your *** neck the first ball you go for.” And sledging hadn’t been invented then!

Q3. What was your favourite position to play?
Left half forward.

Q4. What was your favourite pitch to play on?
Clonduff Park – then known as Mussen’s Meadow.

Q5. Who was your childhood hero?
The late ‘Big Andy Murnin’. His fielding ability, his strength, his scoring rate, his his courage and fearlessness – you didn’t mess with ‘Big’ Andy – even I, as a young child, recognised that.

Q6. What’s your most favourite game you’ve been involved in?
The MacRory Cup final in 1957. I could do nothing wrong that day – the one and only time I got a ‘man of the match’ award.

Q7. And a game to forget?
The defeat in the Hogan Cup final – I still have deep, deep regrets about that game. It was a game we should’ve won easily but didn’t perform on the day.

Q8. What is your biggest achievement in football?
Winning a senior championship medal in 1957 and a senior league medal in 1964.

Q9. Who was your favourite manager that you played under?
Jim McKeever, during my days at The Ranch, McKeever was an outstanding footballer himself but his training abilities, techniques, match preparations and his management skills were light years beyond his peers. I was delighted for him when he finally landed the Sigerson Cup.

Q10. What is the best thing about Clonduff?
The day after Joe McDonagh visited Clonduff in our 125 celebration, he was asked by Dan McCartan did he drive home. “No”, he replied, “I floated home. I have visited many, many GAA clubs in all of the continents – some great clubs – but I have never been in a better club than the one I was in today. They are the perfect club – and they know it, and they are proud of it.”
I share Joe’s sentiments and that to me is the best thing about Clonduff.

Q11. How would you like to be remembered in the club?
Someone who praised and encouraged rather than ridiculed and derided and someone who was always proud to say, “I’m from the Clonduff Club.”

Q12. If you could give one piece of advice to the youth, what would it be?
Listen and learn – practise, and then practise more. Make your mantra – I will be the best I can be – because that is what life in itself is about.

Q13. You are lucky to have lived through great days for both Clonduff and Down. I’m asking you to roll back the years and share with us your memories from;

Clonduff’s championship win in 1980;
The most dedicated bunch of players I have ever been involved with. They didn’t know what defeat meant. They trained hard, they played hard, they celebrated hard but in that order.

Clonduff’s championship win in 2000;
Probably the most talented bunch of players Clonduff ever produced – it still baffled me how they didn’t win more championships.

Downs first All-Ireland success in 1960;
There is a verse quoted in the Scéal Chluain Daimh history book – it is taken from a poem, “The Clonduff boy’s Dream.”
“Though I am young I oft times dream and see myself as Captain of a famous Clonduff team,
To wear the yellow jersey and dare I say the red and black,
And one day go to Croke Park and bring the Sam Maguire back.”
I was there when that dream became a reality and will always remember the following night, two Clonduff men, in Hilltown Square, proudly holding the Sam Maguire before the massive cheering hosts gathered there.

Q14. You have listed some fantastic and inspiring memories for us to read but where does your late, wife Margaret’s role in designing the Clonduff crest rank of all your memories?
As I said at this year’s dinner dance, the proudest moment I have had in Croke Park was when the giant screen in front of the Nally Stand turned yellow – then the crest, Clonduff Camogs had been crowned All-Ireland Champions. Yes I was proud and emotional when I saw the crest. The crest depicts why our parish is named Clonduff but it also depicts how our people have triumphed over adversary down through the years. That’s how Margaret saw it – may her dream always be a reality.

Many thanks Master, a very worthwhile read for all!