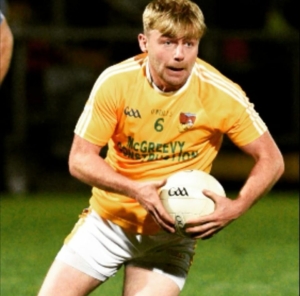 Paul on the ball in determined mood as always

Ciaran McDonald (Mayo) he could pass a ball

5. What’s your most favourite game you’ve been involved in?
A minor match v Mayobridge at home – huge underdogs and a few boys out the night before but we managed to turn them over.

7. Biggest achievement in football? Winning Hogan Cup 2010, great memories on and off the field.

8. You can transfer in one player from across the country, who?
Diarmuid Connolly

9. And transfer one out?
I’d loan Brendy Britton out until he’s able to play for us again.

10. Who is the best trainer in the squad?
Darren O’Hagan – the intensity that man brings is unreal, Mark McPolin deserves a mention too.

11. Who is the worst trainer in the squad?
Butch does the running so I’ll go with Neil.

12. Favourite manager you’ve played under?
Enjoyed them all, Declan Mussen and Tommy Stevenson were great trainers.

13. Who is the managers pet?
Our Ruairi

14. Club volunteer of note?
PJ McGreevy – the work that man does around the place is something else, always has the fields in great shape too.

15. Best thing about Clonduff?
The people

16. How would you like to be remembered in the club?
Someone that gave his all in every game.

17. If you could give one piece of advice to the youth, what would it be?
Listen to coaches, don’t be afraid to use your weaker side and put the hard work in at home.