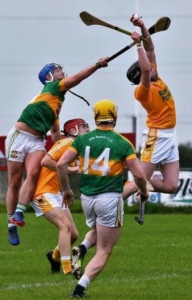 1. When did you make your senior debut?
2005 – Championship Semi Final defeat to Bredagh

2. Favourite position?
Anywhere in the forwards

5. What’s your most favourite game you’ve been involved in?
2018 Championship Final

6. And a game to forget?
Any where we have failed to perform to our ability, 2017 Championship Final and 2018 Semi Final stand out.

7. Biggest achievement in hurling?
2 x Championship medals so far. Hopefully we can add to that.

8. You can transfer in one player from across the country, who?
Tony Kelly, Clare, for his work rate.

9. And transfer one out?
Sean Downey, for his lack of work rate.

10. Who is the best trainer in the squad?
John Murphy

11. Who is the worst trainer in the squad?
Liam McParlan, he’s been semi retired for a few years now.

13. Who is the manager’s pet?
Sean Downey and Danny Nugent

14. Club volunteer of note?
I don’t think It would be fair to name any one person, it takes the effort of every single volunteer to form the great club we have.

15. Best thing about Clonduff?
The fact that it caters for and promotes all codes which is fantastic and the social aspect that the club provides.

16. How would you like to be remembered in the club?
A calm, mature and sensible player on the pitch and a proud Clonduffian.

17. If you could give one piece of advice to the youth, what would it be?
Listen to your manager’s advice and always practice the skills at home, not just when you arrive at training.