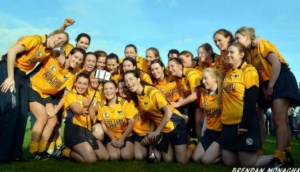 It was a bitterly cold wet day but none of the big Clonduff contingent were aware of it especially in the last few minutes which were really nail-biting! The three minutes additional time seemed like 30 minutes! But worth it!

Clonduff had stormed into a 5 point lead before the Waterford side got into their stride – at half time it was 0-7 to 0-5. There were two major talking points in the half – Fionnuala Carr gathered the ball outside the half-way line, turned and with probably the sweetest strike ever to grace Croke Park, she fired over the bar. Fionnuala was to the fore again when Gailltir were awarded a penalty – Fionnuala was the one on the line to block it round the post!

Clonduff got the first two points of the second half to move 4 ahead but again back came Gailltir scoring three in a row. Captain Fantastic Paula O’Hagan then fired over a long-range free but again Gailtir came back and they fought extremely hard for that elusive goal but with the Clonduff defence in mean mood that was not going to happen and it didn’t!
The joy and relief among both players and supporters knew no bounds and it was an amazing sight to see your Club Name and Crest displayed on that big screen! Then it was back home (after the Senior Final which was won by Derry side Slaughtneil) – after a tour of the parish in the heavily falling snow it was into the beautifully decorated Clubrooms for the post-match banquet fit for Clonduff’s first ever on-field All Ireland Champions.