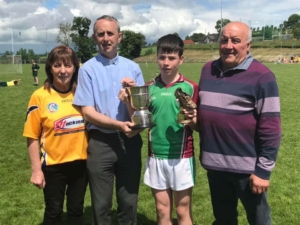 In sharp contrast to the original date which was rained off, glorious sunshine bathed down on the 22 teams from 13 primary schools from County Down who took part in the twenty fifth Connor McConville Gaelic football tournament in Pairc Chluain Daimh on Thursday last, 20th June.
The young players enjoyed a feast of Gaelic Football played to a very high standard. A large number of parents and supporters turned out to cheer on the young players
The competition was played in four sections and eight teams progressed to the quarter finals. In the semi-finals Carrick overcame Warrenpoint while Saval defeated Barr. In what was an exciting final played to a very high standard Saval came out on top and were very worthy winners.
Before the presentations Ms Una Lawless Principal of St Patrick’s PS thanked all those who had worked so hard to make the day such a success, This included the McConville family, the teachers in the school, Ms McNeill, Mr McConville, and Mr Flannigan, all the schools that took part, the referees Mark Rogan, Declan Carlin, Marty Keenan, Jim Burns and the Young Clonduff Volunteers – Paudie Clancy, Poddy Morgan, Jayme McDonald, Aodhán Quinn and Darragh McAlinden (assisting with St Paul’s School team) – whose help was invaluable.
Fr Peter McNeill presented medals to the beaten semi-finalists Barr and Warrenpoint and the runner up trophies to Carrick Primary School. The Connor McConville Cup and winners’ medals were then presented to Saval Primary School who won the competition for the very first time.
Well done to all involved.