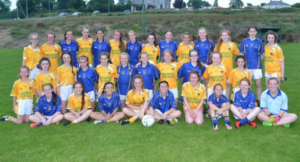 San Francisco U14 Feile Girls played in a very enjoyable and skillful tournament in Clonduff Park on Wednesday 20th June against teams from Clonduff, Mayobridge and Kilcoo in preparation for the Feile this weekend. Well done and many thanks to all involved. Great camaraderie, sportsmanship and emerging friendships especially at the after-party in Clonduff Clubrooms. Many thanks to our neighbouring club for attending, our Young Volunteers who refereed the games, parents for supplying the sandwiches, those who cooked and cleaned up afterwards.
PS the San Fran girls won the Cup in their Division!