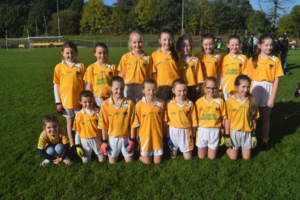 Twelve teams of girls from different parts of Ulster – 5 from Down, 4 from Armagh and one each from Derry, Antrim and Tyrone converged on a sun-bathed Clonduff Park on Saturday 30th September for the final Development Blitz of 2017 organised by Ulster Ladies Council Development Officer Ciarán Murtagh, a Ballyholland man! It could not have operated without our own volunteers particularly our Young Volunteers who took on the refereeing duties – Paddi Fitzpatrick, Erin Rafferty, Emma McGreevy and Éveagh Kelly – without them the Blitz would not have happened! Big thanks to Kieran and Majella Kelly and Steve Gilbey for setting out the pitches and looking after the Clonduff girls; Goretta and Noleen in the Club Shop; Geraldine and Lucas and of course David in the Burger Bar.
It was a fabulous morning for all concerned – the children got lots of football and our Young Volunteers gained a lot of confidence and valuable experience.

It was a really busy day in Clonduff Park – whilst the Blitz was ongoing our U16 Camogs played Ballyholland in the Championship Quarter Final on the top pitch (which they won) and then between 2-5pm the Down U13 LGFA Academy trained also on top pitch; then at 3pm our U13 Boys played Mayobridge in the South Down League (and won)!