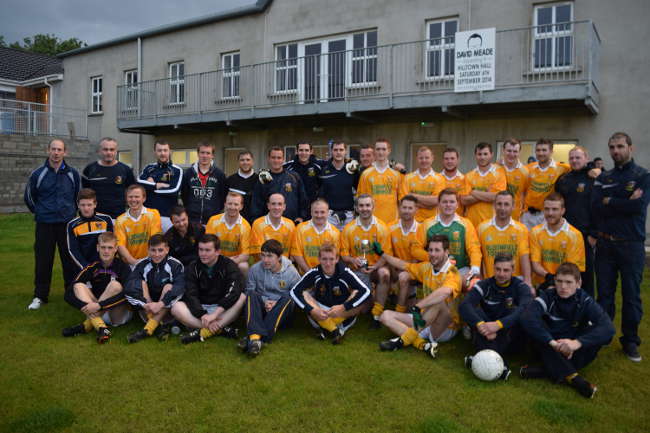 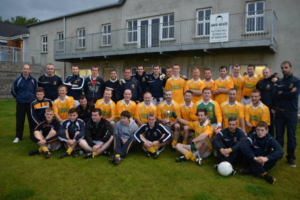 Clonduff emerged winners with just one kick of the ball between the teams in wind and rain-swept Drumgath. The Banbridge side coped better with the elements early on and raced into a 0-4 to 0-1 lead. However the Yellas eventually settled and went in at the break level on 0-5 each.
The rain pelted down in the second half but both teams served up a very exciting half hour’s football. Clann na Banna got the first two points of the second half before Paddy Matthews got on the end of a great move to fire to the back of the net and this was quickly followed by his second goal for Clonduff to move into a 5-point lead. However, right from the kick-out Clann na Banna moved the ball quickly upfield and fired to the back of the net to leave just two points in it. Clonduff ‘camped’ in the Banbridge half but couldn’t draw away from their opponents. They traded points with Clonduff getting the final score of the game.
The cup was presented to Jamie Fegan, the Clonduff Captain by young Callum Donnan, a great-grandson of Felix Darby and a Clonduff U10 player.
The team now has the Reserve Football Championship Final to look forward to v Bryansford III.
Team and scorers: Paul Gribben, Declan Gribben, Jamie Fegan, Francis Quinn, Paul McConville, Paudie Matthews, Cathal Trainor, Rían Branagan (0-1), Oliver Branagan, Marty Farnon, John Fegan (0-3), Rory Matthews (0-1), Darragh Sherry (0-1), Paddy Matthews (2-0), Eugene Branagan (0-3). Subs used: John McPolin, Bernard Branagan, Kieran Trainor