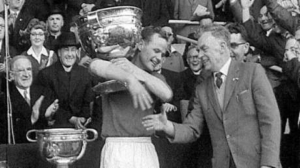 A delighted Kevin Mussen (Clonduff) holds tight to the Sam Maguire in 1960 after captaining Down to the All Ireland title – he was the first man to bring it north of the border!

The Anglo Celt Cup (Ulster Championship Cup) is close by – Down won it for the first time the previous year, 1959 also with Kevin as the Captain. Patsy O’Hagan also played a prominent role in that Down team.