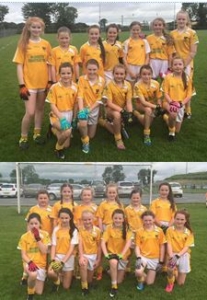 Clonduff hosted their annual U12 LGFA tournament on Saturday and what a fantastic day of football it was! All under 12 girls teams were split into two smaller teams due to having low numbers – it was always going to be tough for both sides but this did not phase the girls who put on a great display of football. The Gaels played Rostrevor, Warrenpoint and Burren in the group stages and progressed to the semi-final where they met Burren Gaels. The girls progressed to the shield final against Warrenpoint which they won!!
The Clonduff Yellas played Burren, Rostrevor and Bryansford in their group stages and progressed to the semifinals playing Rostrevor Reds whom they beat to bring them into the Cup final against Burren St Mary’s but unfortunately we’re runners up in a very good game of football.
Well done to all the girls you should be very proud of yourselves – you are a credit to your parents and the club. Kieran would like to extend his thanks to the referees and runners for doing such a great job and also Alistair for doing fixtures. Big shout out also to the parents/ people who helped out with the tea/coffee/sandwiches and the clean up afterwards it wouldn’t be possible without you!!