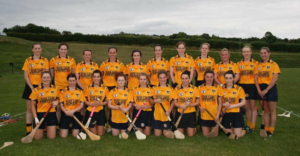 Clonduff reached the County Camogie Final with a scintillating display over reigning County and Ulster Champions Ballycran a few weeks ago. Their opponents in the final were Portaferry and they demonstrated exactly why they were there when the sides met in the Final on Saturday 20th September in sun-bathed RGU Downpatrick. Portaferry got off to a whirlwind start with the advantage of a strong breeze at their backs. They raced into a 1-2 to 0-1 score before Clonduff realised they were in the final and they came more and more into the game and by the break had reduced the deficit to a mere point – 1-3 to 0-5.
In the second half Clonduff demonstrated why they had seven players on the All Ireland Winning Down team a week earlier – they quickly equalised and pulled a head. In fact they held Portaferry scoreless throughout the second half, even when awarded a penalty, the Yellas cleared the ball off the line, moved it upfield and scored a great point. The final score was Clonduff 1-11 Portaferry 1-2.
Captain Ursula Quinn accepted the Cup from Co Camogie Chair Dierdre McGrath and Player of the Tournament was chosen by Francis McGrath and the trophy was presented to Sarah Louise Carr. The team, the mentors Robert Wilson and Eileen Hamill, family and friends returned to the Clubrooms for the traditional Celebratory meal on Saturday evening.
Well done to all concerned!