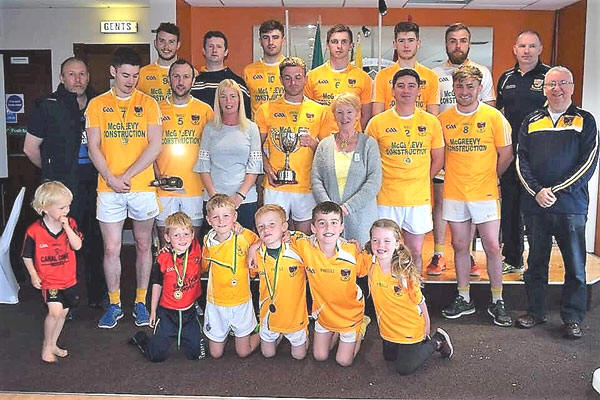 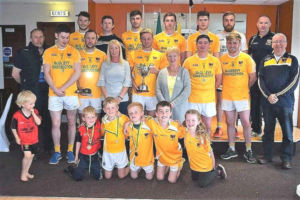 The sun shone down on Clonduff Park most of the time on Saturday 20th May for the second Dalsey Mooney Sevens Tournament – well the rain stayed away until all the onfield activities were over! Many thanks to Drumgath, Kilcoo, Bryansford, Castlewellan, Burren and of course ‘The Yellas’ for the main competition and the Mini Yellas who put on a wonderful exhibition before the final!
The six teams competed in two groups with the winners going directly into the semi -finals and the 2nd and 3rd placed teams playing a quarter final. Clonduff and Castlewellan took the direct route winning their groups – Clonduff had beaten Drumgath and Burren whilst Castlewellan beat Kilcoo and Bryansford. Bryansford were drawn against Burren with the former taking the spoils. Unfortunately the young Drumgath side suffered a couple of injuries and withdrew after the group stage to leave Kilcoo a bye to the semi- final against the home side. The Yellas prevailed and were the first side into the final beating the holders on a score of 2-7 to 1-5. Then it was the turn of Bryansford to see if they could overturn the result from the group game v Castlewellan. Although it was a tightly contested game ‘The Town’ emerged one point victors.
Upwards on 60 U8 children took the field in four teams to showcase their skills and talents – Many thanks to referees Eugene O’Hare and Brendan Rice who not only gave the youngsters the opportunity to play under an official referee but also tied boot laces that had become undone, and helped with coaching! Dalsey’s grand-daughter Aimee Kenny presented every child including her brother Thomas, with a special commemorative medal.
Just before the Final, Christina McConville sang Amhrán na bhFiann and Peter Brannigan called the teams to take the field. Castlewellan got the first two points in a very tightly contested game but a couple of ‘Yella’ goals before the break left them five points up but early in the second half Castlewellan got back a goal and had closed the gap to a single point but again The Yellas held firm and won on a score of 2-8 to 1-9 to collect the Dalsey Mooney Cup at the second time of asking.
All the teams, officials and the children were treated to a hot meal before the presentations – the beaten semi- finalists (Kilcoo and Bryansford) received O’Neills Vouchers to the value of £350 and the runners-up, Castlewellan, received an O’Neills Voucher for £700. Then the champions Clonduff were presented with O’Neills Voucher for £1,500 by Club Chairman Jimmie Cousins; the Dalsey Mooney Memorial Cup was presented by Mrs Eileen Mooney and the players were presented with their medals by Dalsey’s grandchildren Aimee and Thomas Kenny.
A ‘Player of the Tournament’ award was introduced in 2017 and the three referees and an impartial adjudicator were charged with selecting the most impressive player throughout the tournament – the inaugural recipient was adjudged to be our own Conor Óg O’Hagan!
A special presentation was made to the three official referees for the day – Peter Brannigan, Eugene O’Hare and Brendan Rice.
Many thanks to all who helped make this a special day in the life of our club and in memory of a very special former player, gael and gentleman – Dalsey Mooney. Thanks to the Mooney Family, the participants, the organisers, sponsors, officials, supporters and Congress Print Newry for printing the programme free of charge. A special word of gratitude to Dermot and his willing band of voluntary helpers in the social club and kitchen for their second very busy day in a row.
Clonduff team: Ruairi Lively (Capt), Paul Lively, Charlie Carr, Arthur McConville, Stephen McConville, Patrick O’Hagan, Shane McGreevy, Conor Óg O’Hagan, Liam McGreevy and Niall Tumilty.