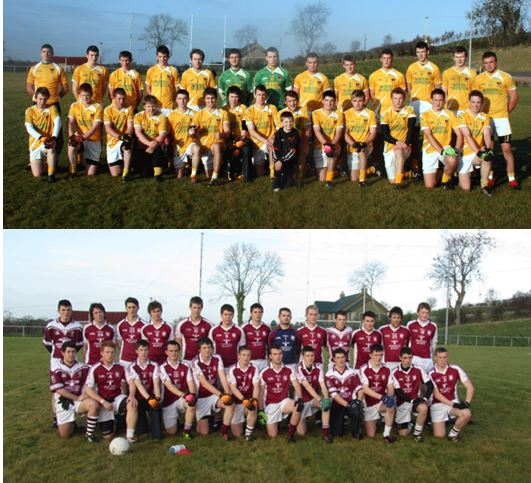 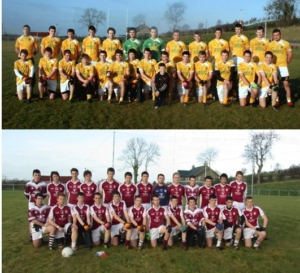 The Club U21 Championship got under way for Clonduff (above) on the the new pitch when they entertained Drumclone (amalgamation of Drumgath and Annaclone) (below) on Saturday 29th October 2011 and had a facile win with a score of 4-16 to 1-8. There were great performances from many of the Clonduff lads including those who had played in the Senior match on Friday night including Arthur McConville who has made a full recovery from the injury he received in the Senior game.
Panel above: Back row (l to r) Ryan McPolin, Niall Tumilty, Barry O’Hagan, Conor Brown, Peter Farnon, John McAleavey, Aaron Sherry, Gary Maginn, Karl O’Hagan, Niall McPolin, Henry Brown, Paddy Matthews, Arthur McConville; Front row (l to r) Michael McGarry, Niall Crowley, Conor Grant, Danny Burns, Tony McGreevy, Paul McPolin, Rory McGreevy, Mark Downey, Darren O’Hagan (Capt), Eugene Lively (in front of Darren), Shane McGreevy, Paul Lively, James Killen, Shay Murnin, Jamie Curran;