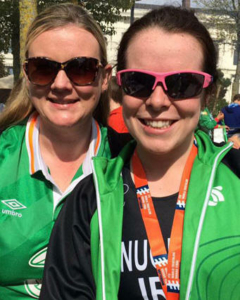 Many congratulations to our former Ladies Gaelic player Clodagh Nugent (right) who set a personal best time representing Ireland in the International Triathlon Union series in the 25-29 age group in Rotterdam on Sunday 17th September 2017. She only took up Triathlon two years ago and this was her first International Event – she enjoyed every minute of it and completed all three stages with a big smile on her face! Well done Clodagh!

Clodagh played Ladies Gaelic Football for Clonduff from U12 right up to senior level and won a County Senior Championship with Clonduff in 2008 and County Feis Sevens title in 2009.

For the past four years Clodagh and Fiancé Michael Graham (Hilltown) have been residing in Moscow where she is teaching PE in the International School. Michael is in primary school, teaching the equivalent of P5.