Home / SNOW IS NO DETERRANT TO PREPARATIONS 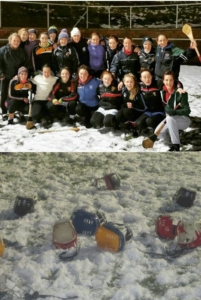 Best wishes to Clonduff Camogs in their All Ireland Semi Final v Piltown (Kilkenny) in Clane, Co Kildare on Sunday 1st February @ 2pm. The girls didn’t let the heavy snow in their final week of preparations deter them! They take the best wishes of the entire parish and further afield with them to Kildare on Sunday. The weather wasn’t the only setback to their preparations – their manager Robert Wilson fell ill and was hospitalised – we wish you well Robert! But what a replacement was found for Robert – former Club manager and 2014 All Ireland County Manager Alistair McGilligan!