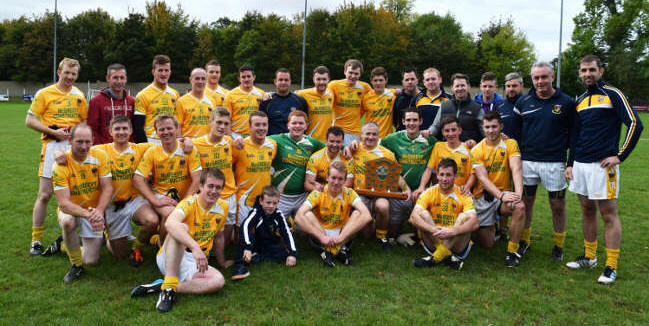 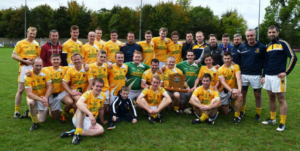 Clonduff III 0-14 Mayobridge III 1-9
Clonduff Thirds reached their third final of the season and having lost the Championship recently were determined that they wouldn’t lose two in a row. But they didn’t make things easy for themselves in this rough, tough encounter in Rostrevor on Sunday (noon). They were undoubtedly the better team but when they were reduced to 14 just before the interval it didn’t look good. The half time score was 0-6 each. However, the Yellas dug deep and played some great football – late into the game they led by three points, a dangerous lead and so it proved – Mayobridge scored a goal to level. Then Francis Quinn, playing at full back, brought off a great clearance at great personal cost – he sustained a broken collar bone. and then the side was further reduced with another man receiving a second yellow card. However, the Yellas had the final say and scored the last two points of the game. Team: Seamus Parr, Declan Gribben, Francis Frank Quinn, John McPolin, Paul McConville, Padraig Matthews, Niall O’Hare, Stephen Branagan, Oliver Branagan, Charlie Carr, John Fegan, Shane Murray, Marty Farnon, Darragh Sherry, Conor Murray; Subs used: Bernard Branagan, Cathal Trainor, Neil Trainor
We wish Francis a very speedy recovery and also Eugene Branagan who was injured in the Championship Final replay the previous week and to Mark Fegan injured who sustained a bad leg break in the first round of the Championship in May.