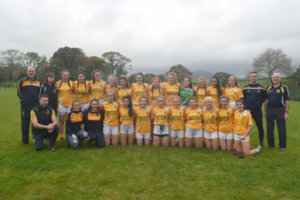 This is a game the Clonduff girls could/should have won but when Lady Luck is not on your side there is little you can do about it. The Clonduff girls got off to a great start and had 1-4 on the board before the Newry side got going. The Clonduff goal resulted from a Sinead Woods free kick from about 30m out that dropped in over the keeper’s head. When Bosco got going they used the strong breeze to their advantage and camped in the Clonduff half and added a further 2-4 to lead 2-5 to 1-4 at the break. Bosco had a player sin-binned early in the second half but whilst Clonduff enjoyed the lion’s share of possession throughout the second half they just couldn’t convert that into scores – they shot in excess of 20 wides.
Team and management – Back row (l to r): Niall Rafferty, Bronagh O’Reilly, Sinead Woods, Emma McGreevy (Capt), Aoife Woods, Orlaith McCusker, Kayleigh McPolin, Kayla Woods, Hannah Wilson, Paddi Fitzpatrick, Corshena McCoy, Caitlin Hughes, Emma Harper, Aoife McCusker, Ryan McShane, John Anthony Gribben; Front row (l to r): Bernard Branagan, Erin Rafferty, Shannon O’Reilly, Tierna Savage, Rhiannon McKeown, Amy Lowry, Alana Donnan, Lauren Kane, Aoife Brown, Isabella O’Hare, Aoife Trainor, Una Fearon