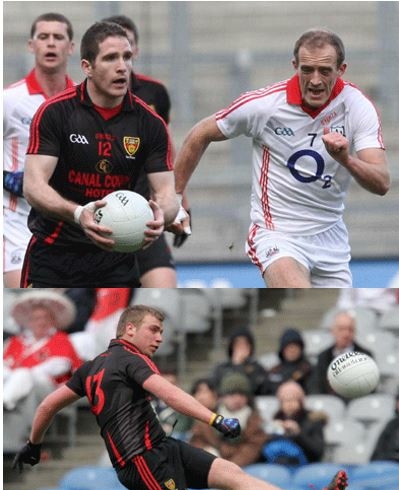 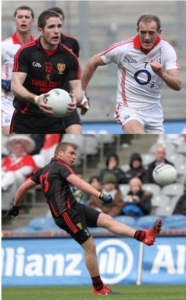 Down once again suffered at the hands of Cork in the League Semi Final losing 2-17 to 1-12. The second goal was the result of a howler by the Down keeper – having caught the ball it slipped through his hands into the path of a cork forward who coolly tapped it into the net. The first goal was also a bit soft and appeared to creep into the net. Aidan and Arthur both had good games – Aidan scored 1-2, the goal resulting from a wonderfully well struck penalty; Arthur scored one point from a free but it was the overall contribution of the two Clonduff lads that caught the eye. No-one should feel too disheartened – having maintained their place in Division 1, the bonus was in reaching the semi finals!
Below (left) Aidan gets away from Paudie Kissane and (right) Arthur taking a free (photos courtesy of Louis McNally)