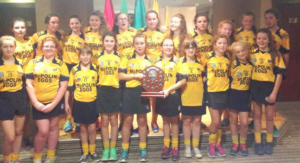 Clonduff U14 Camogs Collected the Championship Shield with an impressive display over Ballycran on Friday night 26th September 2014. Clonduff led 1-4 to 1-1 at half time and held Ballycran scoreless in the second half while adding a further 4-5 to their own tally.  Well done to everyone involved. This picture was taken in Clonduff Clubrooms when the girls returned for the traditional post-match meal.