Clonduff GAA Club again created history on Sunday 21st March 2021 when they recognised the achievements of the player in a Virtual Event via Zoom. Over 70 Clonduffians tuned in and we welcomed the Chairs of the three County Boards – John Devanney (GAA), Helen McAleavey (Camogie) and Stephen Magorrian (LGFA). Proceedings got under way with Amhrán na bhFiann sung by our own All Ireland Solo Singing Champion Aoife Trainor; there were messages of support from Joanne Cantwell of RTE and Connor Phillips of BBC Radio. In her address Club Chairperson Anita Brannigan introduced the new Club President – Fintan Mussen.

The Co Chairs introduced the Award Winners in each code; Camogie Chair Guinevra McGilligan had a special mention for Clonduff’s twelve All Ireland winners on the Down Camogie team. Tommy Kelly introduced the two young players – Padraig Clancy and Aaron Norris who were playing members of St Colman’s All Ireland McGirr Cup winning team.

Halfway through the player awards, we were royally entertained to a musical interlude by the Magee Family – thank you Thomas, Michael and Shea.

The PJ McAlinden Hall of Fame Award took the form of a magnificent interview, brilliantly facilitated by Destination Newry, between our own Ross Carr and the recipient Stephen Morgan a star of the 1950s and 1960s. The Trophy was presented by Bronagh McAlinden and her grandchildren, socially distanced, of course

The biggest surprise of the night, well for the recipient, was for the Hugh McShane Club person of the Year – Sheenagh Walsh. Sheenagh who had played a major part in the presentation. believed it was going to another member – thanks to her family for keeping it under wraps.
The evening ended with a video summary of Clonduff’s activities through the lockdown and on the field followed by the Ross/Stephen interview in full. Most attendees stayed to the bitter end, testimony to the importance of the event.

Senior LGFA Player of the Year Orla Gribben, an accomplished dual player All Ireland medal with Down Camogs 2020 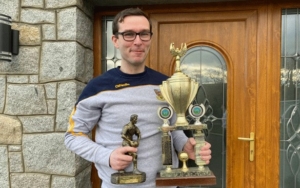 Most Improved Hurler of the Year Chrissy O’Hare

Award winners were as follows:

PJ McAlinden Memorial trophy to and induction into Clonduff’s Hall of Fame – Stephen Morgan. Stephen is pictured in his garden with Ross Carr who, courtesy of Destination Newry had a spell-binding interview with Stephen. Bronagh McAlinden and her grandchildren Katie, Brianna and Sarah presented the award (socially distanced) 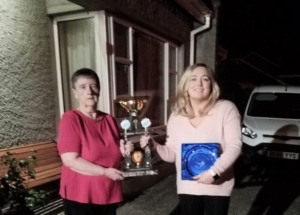 The most surprised recipient on the Night was  Sheenagh Walsh who was presented live during the show with the Hugh McShane Memorial trophy to Club Person of the Year – Sheenagh who played a major part in preparing the Awards Ceremony believed until the moment Goretta Cairns arrived at the door that the award was going to another member of the organising committee.

It is important to note that all the trophies had been door-stepped prior to the event with the exception of the Club Person of the Year which was door-stepped live.

Thank you to Local small business

Many thanks to the local small business who entered the spirit and donated their delectable delights for the raffle for ‘The Early Bird’ draw. The winners of these fabulous prizes were:

All in all a great evening was had by all, admittedly without the celebratory meal but people were so delighted to be connected that they just wanted to stay online.

Many thanks to our excellent Fear an Tí on the night Padraig Matthews who is also Vice Chair of Clonduff Club.