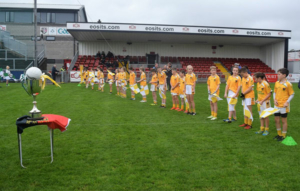 Clonduff Minor Boys were in the 2017 County Minor Final which was the curtain raiser to the Senior Final in which Burren were playing Kilcoo in Pairc Esler. And what a game it turned out to be! 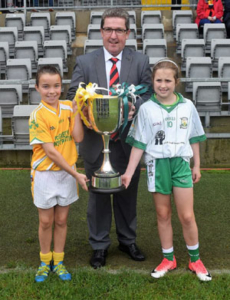 Burren were the hot favourites but Clonduff gave them a great run for their money! Deep into injury time Clonduff were two points behind when they scored a magnificent goal to take the lead only to have it snatched away again when, from the kickout, Burren moved the ball upfield and finished it expertly to the net. Heartbreak for the lads in Yellow! 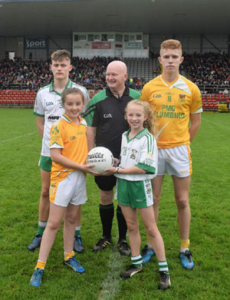 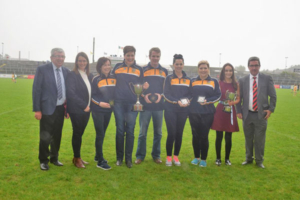 Our own Plunkett McConville took over as Stadium Announcer duties for the Senior game which was televised by TG4. In the parade of clubs (each club was asked to nominate an U12 player) Erin Morgan was Clonduff’s Down flag bearer. Then Niamh McDowell sang Amhrán na bhFiann accompanied by Mayobridge Band – great performance!

Kilcoo won the Senior game by two points. Congratulations to both winning teams!