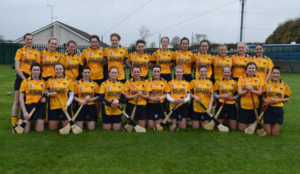 A dominant 2nd half display from Clonduff Camogs earned them a replay v Eglish in Ulster Intermediate Club Final. Playing against the elements in wild and windy Granemore Clonduff scored a single point but the opposition had only scored one until the 20th minute – then they dropped in a couple of long range balls that fooled everybody and ended in the back of the net. The half time score was 2-2 to 0-1
What a contrast in the second half – Clonduff started with a goal! And then dominated affairs to pull back to within one point with 18 mins gone. Clonduff, like Eglish in the first half, found the wind difficult to guage and fired so many wides and just couldn’t get the equaliser until injury time and still had a chance to win. Eglish didn’t score in the second half to leave final score Clonduff 1-5 Eglish 2-2. What a prospect in store for the replay!
Team and scorers: Kitty Fegan, Leanne Quinn, Jenna Boden, Orla Maginn, Nicola O’Hagan, Fionnuala Carr, Clare McGillign, Lisa McPolin (0-1), Ursula Quinn (Capt), Lizzie Wilson, Paula Gribben (0-1), Cassie Fitzpatrick, Karen Haughey (0-1), Sara Louise Carr (1-2), Orla Gribben. Sub used: Petrina Lively. Other panellists: Debra Murray, Shannon O’Hagan, Caílín Hynes, Niohmí Murray, Ciara Tumilty, Niamh Brown, Onagh McClorey