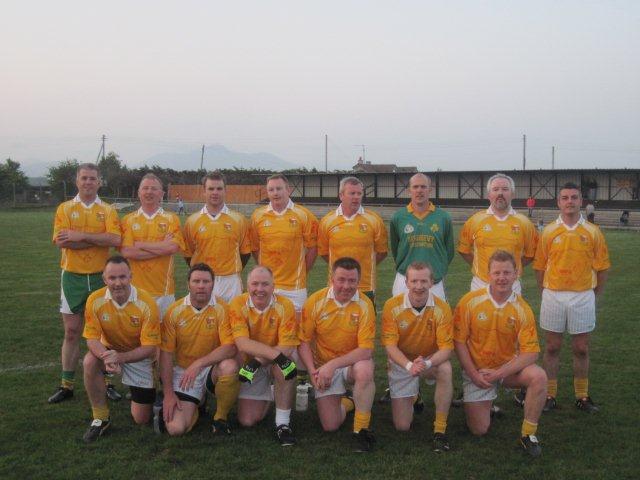 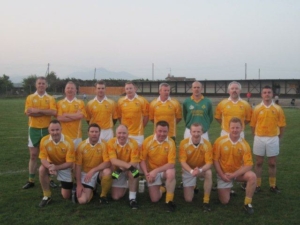 ‘A Blast from the Past’ – Clonduff and An Riocht are the two Down Clubs pioneering the Social Initiative in the county. An Riocht invited a team of past Clonduff players to play a team of past An Riocht players in an 11-a-side game in the Kingdom on Friday 29th April. Niall Rafferty (Goalie), former An Riocht man, now Clonduff’s Vice Chairperson, and joint Social Initiative organiser, reported that a it was very enjoyable evening. Although it ended in a 2 point defeat for the Yellas, the players took it in great spirits and had a great evening after the game talking over old times with The Kingdom lads.
The Clonduff eleven were augmented by a couple of ‘guest’ players having at some time played for ‘The Yellas’. Back row: Mark Matthews, Paul Shields, Robert Wilson, Niall Rafferty (Guest), Nigel McPolin, Conor Donnan. Front row: Paul McShane, Peter Withnell, Paul Kelly, Francis Quinn and Rory Matthews.
A rematch will take place in Clonduff later so hopefully there will be a different result. If there is any one looking for a game of football please get in touch with Niall as there is likely to be a series of such games.